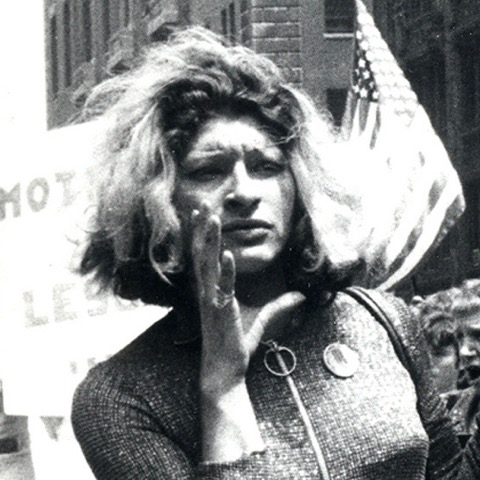 Sylvia Rivera would have loved knowing that in the years since her death in 2002 she’s become an icon—a symbol of LGBTQ people fighting back against police repression and fighting for respect and equal rights.  But she’d also want you to know that she was a human being, born in the Bronx in 1951.  Eleven years later the self-described effeminate child found herself homeless and hustling on 42nd Street to scratch out enough money to get by.  Sylvia was all of seventeen when she crossed paths with history at the Stonewall Inn on the night of June 28, 1969.  She died at 51, having struggled with addiction and homelessness for much of her life, even as she continued to fight for trans rights and LGBTQ equality.

To learn more about Sylvia, have a look at this astonishing 1973 video, shot by the L.O.V.E Collective, of Sylvia speaking at the 1973 Christopher Street Liberation Day rally in Washington Square Park against the wishes of lesbian feminists who objected to Sylvia’s cross-dressing as sexist.  Soon after Sylvia’s speech, Vito Russo, the event’s emcee, called on his friend Bette Midler to sing “Friends” to keep the crowd from erupting into a full scale riot.  You can watch a video of Bette Midler singing at the rally, which was also shot by the L.O.V.E. Collective here.  For information please contact the Collective at LoveTapesCollective@gmail.com.

Listen to the second part of Eric Marcus’s interview with Sylvia here, and check out “Sylvia’s Stonewall,” an episode MGH produced for Netflix’s Tales of Your City podcast here.

In a 2015 NBC News article “A Forgotten Latina Trailblazer,” reporter Raul Reyes gives a solid overview of Sylvia’s life and her impact on the LGBT civil rights movement in New York City, although he mistakenly states that the Stonewall uprising marked the start of the LGBT civil rights movement.  While it was a key moment and catalyzing event, the movement was already nearly two decades old by June 1969.

If you’d like to know more about the Stonewall uprising, check out David Carter’s definitive book about Stonewall and a column by Eric Marcus that he wrote for the New York Post for the 40th anniversary about Stonewall in which he challenges some of that landmark event’s most common myths.

And, finally, PBS “American Experience” produced “Stonewall Uprising,” a 2010 documentary that tells the story of what happened at Stonewall in the voices of people who were there.

Hi, Eric Marcus here with the Making Gay History podcast. Each week we take a deep dive into my stack of decades-old audio cassettes to share with you the voices of LGBTQ history.

In our first episode you’ll meet Sylvia Rivera. She was an iconic trans activist who also happened to be at Stonewall in 1969, June 28, the night of the big uprising.

I’ll never forget seeing Sylvia for the first time. I was standing in the entry hall of her tenement building in a small river town in New York.  And she was standing at the top of a rickety staircase in the glare of a bare lightbulb. She had these really strong features: high cheekbones, wide-spaced eyes, gap-toothed smile. She was wearing red lipstick. She was wearing this outfit that my sister would have worn in the 1970s if she’d had the guts. It was a black halter top, tied at the waist, over a skin-tight black undershirt, and tucked into hot pink Spandex pants tucked into beige knee-high boots with chunky heels. And I don’t know if it was the combination of her face, her makeup, her hair, or her outfit, or the light, but she scared the shit out of me.

I was wearing an orange down parka and green corduroys and I looked like I’d stepped off the “F” train from Queens, which is where I’m from.

So I caught my breath, climbed the stairs, and Sylvia welcomed me into her steamy kitchen. The windows were all fogged. She introduced me to her boyfriend, who was the most nondescript guy you can imagine, especially next to Sylvia. And sitting in a chair off to the side was her friend Rennie, who was Sylvia’s butch opposite. Flat top haircut, lumberjack shirt, overalls, work boots.

A pot of chili was cooking on the stove. There was a bottle of vodka on the table that was almost empty. I don’t remember now if she offered me a drink or not, but I have what I call Jewish Liver Syndrome and a teaspoon of vodka would leave me on the floor. No Sylvia.

So I got myself situated. I clipped the microphone onto Sylvia’s halter top and I set my recorder to record.

Now, on this tape you’ll hear me call Sylvia “Ray,” which was the name she was going by at the time.

We had just come back in from, um, from Washington, my first lover and I.  We were passing forged checks and what not.  But we were making good money.  And so, well, let’s go to the Stonewall.  Let’s do our thing.  Let’s go there, you know.  Actually it was the first time that I had even been to friggin’ Stonewall.

I wasn’t in full drag.  I was dressed, you know, very pleasantly.  I was wearing a woman’s suit.  Bell bottoms were out then.  I had made this fabulous suit at home and I was wearing that and I had the hair out.  Lots of makeup, lots of hair.

Eric:  Were you drinking at the bar or just standing around?

I don’t know if it was the customers or it was the police.  It just [snaps fingers], everything clicked.

Everybody just like, why the fuck are we doin’ all this for?  The people at them bars, especially at the Stonewall, were involved in other movements and everybody just like, alright, we gotta’ do our thing.  We’re gonna’ go for it.  And when they ushered us out, it was nice, you know, when they just very nicely put you out the door.  And then you’re standing across the street in Sheridan Square park and, but why?  Buy why?  All of a sudden you just feel this… everybody’s looking at each other.  But why do we have to keep on constantly putting up with this?  And the nickels, the dimes, the pennies, and the quarters started flying.

Sylvia: The payoff.  That was the payoff.

Sylvia:  That was the payoff.

Eric:  It was to symbolize the payoff.

Sylvia:  Yep.  You already got…

Eric:  And here’s some more?

Sylvia:  And here’s some more.  To be there, you know… is was just like, oh, it was so beautiful…

Eric:  Was it exciting?

Sylvia:  Oh, it was so exciting.  It was like, wow, we’re doing it.  We’re doing it.  We’re fucking their nerves.  The cops were, you know, they just panicked.  Inspector Pine really panicked.  He really did.  Plus, he had no backup.  He knew…  He did not expect any of the retaliation that the gay community gave him at that point.

Eric:  Do you think all this was in part because people were so angry for so long?

Sylvia:  People were very angry for so long.  I mean, how long can you live in a closet?

I was already out of my closet.

When you’re obvious back then there was nothing to hold you back.

It was always the effeminate male or the butch woman, that’s what society always looked at. We are the ones that went out there and we didn’t take no shit from them.  We didn’t have nothing to lose.  Actually, you know, at that point in time, you know, I understand the ones that held their heads down low, because they probably had very nice jobs and they had a family to go to.

I was born to be an effeminate child.  My grandmother used to come home and find me all dressed up. Just like…  I’d get my ass whipped, of course, you know.  “Well we don’t do this.  You’re one of the boys.  I want you to be a mechanic.”  I said, no, but I want to be a hairdresser.  I want to do this.  And I want to wear these clothes.

I was born July 2, 1951, at 2:30 in the morning in a taxi cab in the old Lincoln Hospital parking lot.  The old queen couldn’t wait.  She says, “I’m ready to hit the streets.”  My grandmother used to always joke about that.  I said, “Yeah, you see why I’m always standing out on the street corner.  And then I was…  came out feet first.

Eric:  So you landed on…

Sylvia:  So I was ready.

The only reason that I left home at such an early age was because my grandmother came home crying one day with the tears in her eyes and says, “They’re calling you ‘pato.'” Which means faggot in the Spanish language.  And it hurt her so bad because they were doing this to me.  And she knew where I was coming from.  She knew.

I had that much respect for my grandmother.  I didn’t want her to suffer.  It wasn’t my suffering.  I was worrying about her suffering.

Eric:  How did you survive on the streets?

Sylvia:  Became a street walker.  You stand out in the street and you make money.

Sylvia:  At that age it was easy to make money.

I don’t know how many times my grandmother had to come and bail me out of jail.  She was there.  She always came, bailed me out.  She says, “Oh, that’s my grandson.  I have to take him out.”

Eric:  What were you in jail for?

Sylvia:  Prostitution.  You know, bullshit loitering.  Nothing major, you know.

If you walked down 42nd Street and even looked like a faggot, you were going to jail.

Eric:  So you went to jail a few times.

The community is always embarrassed by drag queens.

Eric:  Why do you think?

Sylvia:  Because, straight society always looks, “Oh, well a faggot always dresses in drag or he’s too effeminate.”  You’ve got to be who you are.  Passing is like saying a light skin black woman or black male passing for white.  And I refuse to pass.

Eric:  You couldn’t have passed.

Eric:  Not in this lifetime.

This interview was the only time I ever talked to Sylvia. And I’m sorry that I never did again. I wish I had.

In the years that followed, Sylvia struggled with addiction and homelessness. And she died on February 19, 2002. She was fifty-one. When I interviewed Sylvia she talked about how old she was and how young I was. She said she was thirty-nine at the time. I think she was actually thirty-eight. And I was thirty-one. I’m nearly sixty. And now looking back at her age when she died, fifty-one, she seemed so young.

I’d like to thank our brilliant executive producer, Sara Burningham, our wonderfully fussy audio engineer, Casey Holford, our exquisite composer, Fritz Meyers. Thank you, also, to Hannah Moch, our social media guru, and our masterful webmaster, Jonathan Dozier-Ezell. We had production assistance from the incredibly talented Jenna Weiss-Berman, whose enthusiasm for this project made it possible.

The Making Gay History podcast is a co-production of Pineapple Street Media, with funding from the Arcus Foundation, which is dedicated to the idea that people can live in harmony with one another and the natural world. Learn more about Arcus and its partners at arcusfoundation.org.

And if you like what you’ve heard, please subscribe to the Making Gay History podcast on iTunes, Stitcher, or wherever you get your podcasts. You can find all our episodes on our website at makinggayhistory.com.

So long! Until next time!