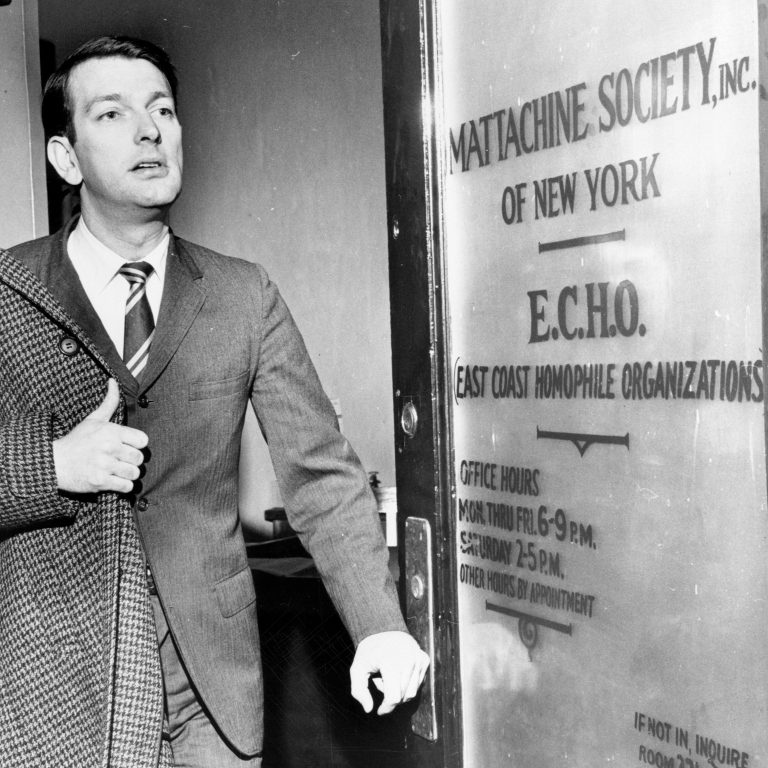 1960’s gay rights champion Dick Leitsch died on June 22, 2018.  We’ll be bringing you a full episode about Dick and his contributions to the movement during Season Four.  In the meantime, we’ve produced this farewell episode to introduce you to Dick, who was a one-of-a-kind, out-and-proud, fearless leader at a time when few people dared to risk all to carry the ball forward in the fight against police oppression and society’s condemnation.

I’m Eric Marcus and this is Making Gay History.

In the words of Matthew Riemer from LGBT_History, “If you’ve had a drink in a bar in New York City without fear of being refused service for being gay, or of being arrested or caught up in a raid, raise a glass to to Dick Leitsch.  And remember where we came from.”

Dick was a force of nature, and as president of the Mattachine Society of New York he fought against police harassment and entrapment and made headway at a time when there had been little hope for real change. He’s probably best known for leading a well-planned protest in 1966 called the “sip-in,” which was directly inspired by the earlier lunch counter sit-ins of the black civil rights movement in the American South.

With reporters and a photographer in tow, Dick and three other Mattachine activists shined a light on the routine harassment and criminalization of gay people just wanting to go get a drink.

I first met Dick when I interviewed him in 1989 for my oral history book. His rapid-fire Kentucky sass-talk just about  overwhelmed me. And the prospect of transcribing everything he said that day totally overwhelmed me.

Thirty years later, as we started working on Season Four of Making Gay History, which we’re bringing to you this coming fall, I dug out Dick’s original interview to see what we might use.  I was listening to that old tape when I got an email from a friend. Dick had been given weeks to live. And he was having a going away party to say farewell.  So I caught the subway uptown to go see him for the last time.

Eric’s narration:  Dick’s Upper West Side apartment is on the 11th floor of an early 20th century brick building.

Eric’s narration:  It’s  a cross between my Grandma Ethel and Great Aunt Gussie’s apartments.  Overstuffed furniture, dark wood cabinets jam-packed bookshelves, framed photographs, figurines, china, and glassware.  But unlike my Grandma and Great Aunt’s apartments, Dick’s place is filled to the brim with memorabilia from his years in the movement—and on this evening, with friends of all ages.

Eric’s narration:  Dick is moving from room to room greeting the dozens of guests. He says he’s never been busier.

Dick Leitsch:  When I was well, usually I was lucky if I had two or three phone calls a day.  But all of a sudden they find out that they’re never gonna’ see me again, and they find out… a lot of people I never saw before in life and all… they remember me.  All my old friends want to see me again. So, everybody calls, everybody calls, everybody calls. And so now, like, I spend my whole life going out buying coffee and groceries.  For people who come here I have to have crackers and coffee and stuff around here and it’s turned into a big party.

Eric’s narration:  Dick’s final days were filled with friendship and love thanks in large part to his young friends, among them, Paul Havern.

Paul:  So we met actually at a friend’s party that was honoring Dick a few years ago, um, and, um, we became really good friends and, um, he started asking for like help on little things.  And so I sort of got involved.

Eric:  Has he inspired you in any way?

Paul:   Oh, totally, um, just, uh, the way that a person’s small actions can change something is so incredible.  Um, and, you know, it was small actions that led to this much greater cause. And, um, although the actions were small, I should say that the sacrifices were great.  Dick really had to sacrifice a lot of things, um, his safety, his personal health and, you know, thinking about things like retirement and all that in a bigger sense, financially.  He had to sacrifice all of that for our rights.

Eric’s narration:  Dick leads us into his bedroom and asks Paul to retrieve some papers.

Paul:  I put them away.  Oh, you want to see them?  Dick didn’t want them to get hurt, so we said, “You can take photos.  Nobody’s touching.”

Eric’s narration:  It’s three letters he’d received a couple of days before. One from President Bill Clinton, one from Hillary Clinton and this one, from President Barack Obama:

Eric:  Dear Dick, I recently learned of the challenges you are facing and also of the tremendous courage you are showing, and I wanted to reach out to thank you for your decades of work to help drive our nation forward on the path toward LGBT equality.

Our journey as a nation depends, as it always has, on the collective and persistent effort of people like you—compassionate, caring, and open-minded—who stand up and speak out in defense of the notion that love is love and that all of us, no matter who we are or who we love, are worthy of equal dignity, equal respect, and equal protection under the law.  We’ve seen more progress made and more hearts and minds change than many ever thought possible, and I am grateful for your extraordinary contributions to our brighter future.

May the love of those around you and the passion that drives you enable you to find joy and peace during the difficult times you are going through.  Please know you and your family will remain in my thoughts.

Eric’s narration:  And then Dick’s off again…

Eric’s narration:  There’s a New Yorker writer in the next room who wants to speak to him, and Dick apologizes to a friend as he pushes through the crowd to get to his living room.

Eric’s narration:  The last time I was in Dick’s apartment was in 1989 and it was a lot quieter.  Dick was living in relative obscurity working as a bartender.  He had dropped out of the movement not long after the Stonewall Uprising.  By the 1980s, his contributions were largely forgotten.  It was just the two of us and Dick’s then lover, Timothy, who was clearly ill—Dick said it was AIDS. Tim retreated to his bedroom so Dick and I could talk. In the silence, which was rare with Dick, I clipped the microphone to his shirt and pressed record.

Eric:  Interview with Dick Leitsch, Monday, January 23, 1989, at the home of Dick Leitsch in New York City.  Interviewer is Eric Marcus. Tape one, side one. So let’s start.

Dick:  See, everybody’s mother was born around then.  I’ve always been the oldest person I know.

Dick:  Really.  ‘Cause I just was born just ahead of the baby boom, so I’ve always been a little bit older than everybody else and a lot older than some.  I was born in Louisville, Kentucky… Catholic schools… I wanted to get the hell out of Louisville and go someplace civilized. Because on Saturday mornings everybody would go to the movies and all the other kids wanted to be cowboys and firemen and whatever, space people.  And I wanted to go to New York and smoke cigarettes and drink cocktails like Bette Davis. And God damn it, I did it and they’re still not cowboys. So, uh…

Eric’s narration:  The transcript of that interview thirty years ago filled 69 pages—single spaced! Dick had a lifetime of  stories and adventures to share. And I’m so glad he can keep telling you his stories—through this podcast, and through all the archival materials he collected over the years that now reside with the New York Public Library.

But let’s get back to March 2018 and Dick’s going away party. That night he really was the oldest person in the room.  And despite being terminally ill, he was loving every minute of being at the center of attention.

Dick:  I’m having such a good time and it’s been so glorious that if I had known that I would have died sooner because…[laughs].  And of course the only problem with this is it’s so much fun that I’d like to be well and have it all over and then come back and do it a second time and maybe get well and come back and have it a third time…  But if I did that, you know what would happen, all of a sudden people might stop paying attention to me and about the third or fourth time they’d be saying, “Oh, God, there goes Dick dying one more time for attention.  I figured that dying is one thing you have to do one time in your life and always do it as well as you can and make it as much fun out of it as you can.

Dick:  I thought I wouldn’t be.  That’s the surprise. I thought all the people that I knew were dead like I almost was.  I really did think I was going to be forgotten.

Eric’s narration:  Dick Leitsch, the former president of the Mattachine Society of New York, died on June 22, 2018. He was 83 years old.  So long Dick, you won’t be forgotten.

This special episode of Making Gay History was produced by Sara Burningham and Josh Gwynn. Our theme music was composed by Fritz Meyers. Thank you to digital strategist Will Coley, social media producer Denio Lourenco, our webmaster, Jonathan Dozier-Ezell, and photo editor, Michael Green. A very special thank you to Jenna Weiss-Berman.

The Making Gay History podcast is a co-production of Pineapple Street Media, with assistance from the New York Public Library’s Manuscripts and Archives Division and ONE Archives at the USC Libraries.

Making Gay History is made possible with funding from the Ford Foundation, which is on the front lines of social change worldwide, and the Jonathan Logan Family Foundation, which supports organizations that advance social justice.

You can subscribe to Making Gay History wherever you get your podcasts or listen to us on our website at makinggayhistory.com.  That’s also where you’ll find all our episodes, including photographs, notes, and links to additional information about the many people we’ve feature in Making Gay History. And it’s where you’ll find the iconic Fred McDarrah photo of Dick Leitch’s 1966 sip-in.