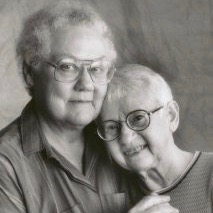 To learn more about Barbara Gittings and Kay Lahusen, click here and here to access the episode notes from our original two episodes featuring Barbara and Kay. And don’t miss our special bonus episode featuring our visit with Kay and her friends at the monthly gay table that Kay hosts at the retirement community where she now lives.

Eric Marcus Narration: I’m Eric Marcus, and this is a Making Gay History special minisode. It’s 1:20 a.m. on June 28, 2019. Exactly 50 years ago, Inspector Seymour Pine and other members of the NYPD’s morals squad, entered the Stonewall Inn. The raid sparked a series of riots that in turn set off a wave of protests and organizing that transformed a small movement for gay civil rights into a national movement for gay liberation.

We’re sharing first-hand accounts of the raid, the riots, and the struggle for liberation that followed in four minisodes that we’ve released all at once, on the anniversary of the Stonewall uprising.

Barbara Gittings and Kay Lahusen were almost as far from the action on Christopher Street as I was at this time 50 years ago. They were spending their summer—as many LGBTQ people still do—on Fire Island. When they heard about what happened, they headed straight for New York City to join the explosion of post-Stonewall organizing.

But I almost didn’t hear about that. In 1989, after several hours of interviewing Kay and Barbara about their work in the homophile movement, we were wrapping up. I was about to pack up my tape recorder, but then I got this uneasy feeling that I was missing something.

Barbara Gittings: What is your timeline? Up to Stonewall?

Kay Lahusen: Oh. Well, then we haven’t finished with you yet.

BG: Yes, there really is a lot.

EM: How did you hear about GAA?

BG: She was one of the co-founders.

KL: Well, I used to go to the Gay Liberation Front meetings.

EM: How did that come about? Were you in New York at the time?

KL: Yes, I worked in New York, and Barbara and I were out on Fire Island, where we had rented a very lovely house along with some other women. And when we heard about the Stonewall riots and then when we came back in, all these Gay Liberation Front meetings were going on. And so I immediately started attending. It was the best theater in town.

BG: Well, it was the only game in town other than Mattachine Society, which had been rather slow, or had seemed to some people to be rather slow to respond to Stonewall.

KL: Mattachine was so stuffy and its day was over. I mean, these organizations do seem to have a built-in trajectory.

BG: They have to have a time, right. And Mattachine seemed to be past it for a lively response to the Stonewall riots, and instead came GLF to fill the void and—

KL: Barbara and I would… Barbara would come up, too, from Philadelphia and we would sit there…

EM: How were you treated by the GLF crowd?

KL: Oh, oh, they were huge meetings. They didn’t even know who we were. So it didn’t much matter.

BG: That was not always the case. I remember a meeting that I attended along with Frank Kameny—you might ask him about it if you haven’t already covered him—and a gay activist woman from Philadelphia named Berna Aaronson. And there were a couple of others. And I don’t remember the year, but it was early on. And we were, would you believe, I don’t know how this happened, but we were sort of called on the carpet—there was no carpet, of course—at a GLF meeting in New York City. And Frank was there from Washington. I was there.

Here was a brand new organization that was presuming to tell everybody how to run the show. And they actually called us on the carpet to explain who we were and what we were doing there. Why were we at a GLF meeting? It was incredible. I mean, for once, I think Frank was even dumbfounded so that he couldn’t come up with any kind of—

KL: Oh, I’m sure he regrouped.

BG: They wanted to know, “What are your credentials? What are you doing here?” As though you owed them—

KL: Or, “How can you presume to speak for gay people?”

BG: Yes, as if you owed them an explanation of your presence in that room when in fact the meetings had always been advertised as open to everyone. And I think finally my response just boiled down to, you know, sitting there very mulishly and saying, “I’m gay. That’s why I’m here.”

EM: How would they have picked you out from the crowd?

BG: This guy knew who we were.

KL: We didn’t have the right radical rags on. We didn’t have enough money to buy what all these leftists with no jobs somehow had the money for. CIA money.

BG: Yes, radicals with million dollar boots, which they got from capitalist endeavors.

KL: Each one more far out than thou in terms of their leftist ideology. I mean, they were spouting stuff I never heard before. Cuz here I am, I’m this plain Jane out of the gay movement, right?

KL: The homophile movement, right. Although I never liked that word, but…

EM: But you were the pre-’69 movement, and you were a dinosaur.

KL: Yeah, right, I was a dinosaur. They didn’t know me from anybody. Well, the new wave frequently does try to, you know, put out of business the last wave. It was a whole new lingo of oppression, oppression. They used to be really wild.

BG: It had limited appeal, let’s face it, for a lot of people who were not ready to be so angry about everything.

KL: You have no idea… It was total emotional blowouts every meeting. I mean, it was like going through a catharsis every time. Unlike anything we had ever seen, right?

EM: Where did it come from?

KL: Out of the blue! I mean, I was convinced that this was a communist…

BG: I don’t know where they came from…

KL: … or a new left plot. I even made my efforts to investigate these people for taking over our movement. But in any case, I think most of them were gay, but…

KL: … had been tucked away in other leftist causes and suddenly saw the gay bandwagon as the one to hop on. And it was a total mishmash of a few of us out of the old gay movement, like Craig Rodwell and his Oscar Wilde Bookshop and all, he was there. And some of us who were working folk in New York who otherwise would have been living it up on Fire Island, but suddenly we were drawn into all this radical hoopla.

BG: Yes, the transition from the smaller movement before Stonewall to the newer movement, some of the things that happened in the ’70s, I think, ought to be talked about.

EM: It’s a critical transition. And there are very few people like you, like the two of you, who survived from, at least this is my impression, survived from the ’60s into the ’70s to speak about it.

EM: Why did you stay with it? Lots of people didn’t.

KL: Because I always cared passionately about what happened to gay people. So I wasn’t there to advance some leftist ideology, nor did I think that was the, what would save the gay minority. I mean, you know, they were pointing to Cuba and to Russia and, you know, constantly trying to make the good case for how great it would be under socialism and how our cause was really an economic cause. And that we really needed to overthrow capitalism and have a socialist regime, blah, blah.

You can only do so much in this world. And my passion has always been to alleviate the loneliness and increase the acceptability of gay life but… And they had so many little factions, and they would have their endless blowouts with one another.

And they were here today, gone tomorrow. I mean, even they said, “We’re just here as a catalyst to push things over in the right direction. We’ll push this movement over into a movement of the people and all be up front.” Which, it could be said in a sense they did. But I think the time was right. It would have happened anyway.

We had been picketing. It was nothing to us to get out in a demonstration.

KL: I’ll leave you with one thought, my driving, you know, force and the reason I am so passionate about all this… It really is that it just is really so wrong that a good gay relationship had to break up because it was felt at the time that this was no kind of life to be lived, that there was no good quality of life in this direction. And I just want to turn that around in this world. And that’s what drives me.

EM: If ever there was a driving reason, that is… That is as strong a driving reason… What we’re talking about is… What happened to you is that, you had a love relationship with someone that was destroyed because society said it was wrong, even though you knew it wasn’t wrong. And there is nothing, I don’t think, more tragic for two people to experience than…

KL: Right. For no good reason.

EM Narration: Barbara and Kay remained active in the movement for the rest of their lives. Barbara died on February 18, 2007. She was 74. Kay Lahusen is 89 and lives in a retirement community where she hosts a monthly gay dinner table. Hi Kay!

This podcast is produced thanks to an incredible team of hard-working professionals. You’ll find them listed at makinggayhistory.com. That’s also where you’ll find full transcripts, archival photos, and extensive additional resources that come with all our episodes—mini and major.