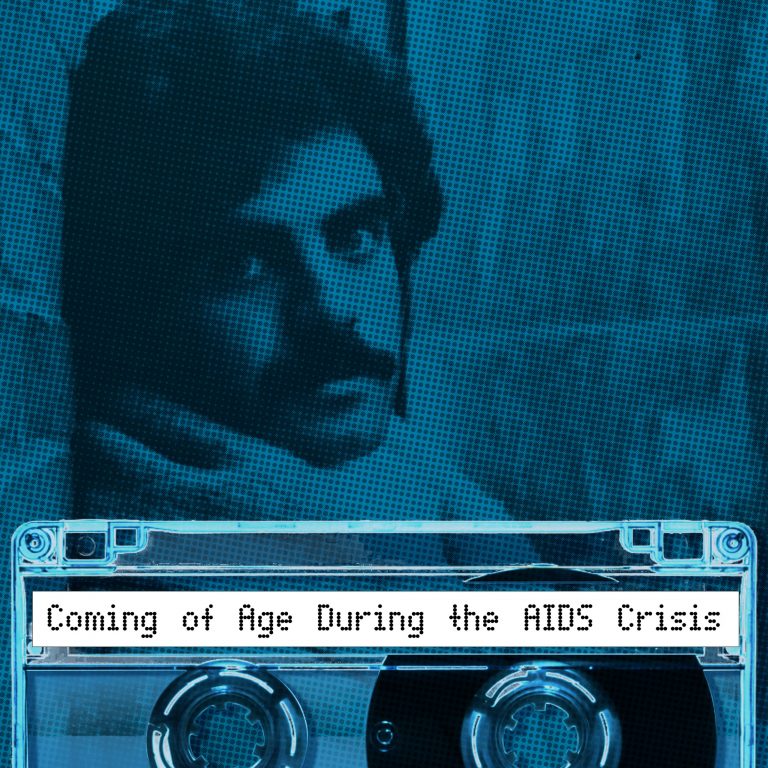 AIDS first made national news 40 years ago. MGH host Eric Marcus was 22 at the time, a gay kid in search of love and a career in New York City. In this six-part audio memoir, Eric explores his memories of the early years of the epidemic and reconnects with people whose lives intersected with his.

Doug Aucoin: Over and over. I wonder why we were both playing it.

EM: I don’t know. I just love the album, and it was very romantic, and I…

DA: I love that album.

DA: It was beautiful.

EM: … I wanted a boyfriend.

EM: ’Cause I was thinking that I didn’t sleep with anyone that summer except, except you.

EM Narration: But just as I was finding my way, an epidemic was taking hold.

Vito Russo: I remember it was referred to as gay cancer at the time.

Randy Shilts: It wasn’t called AIDS then. It was called GRID.

EM Narration: Four letters came together with deadly meaning and cast a shadow over our lives.

EM Narration: I’m Eric Marcus and this podcast, Making Gay History, brings LGBTQ history to life through the voices of the people who lived it. But I’ve never been the subject of this podcast. I rarely talk about that period of my life—a period of history that left so many of us forever changed, including me.

I rarely talk about the loss. Too many names.

This summer it’s 40 years since the first documented cases of AIDS. And I want to talk about it—with you.

Hal Moskowitz: If I lose it and go into an ugly cry, I apologize in advance, but this, I don’t usually think about this time—these, those days—often. It’s just too painful.

EM Narration: Join me for “Making Gay History Presents: Coming of Age During the AIDS Crisis,” a story of finding my way in the 1980s. Over six chapters of this audio memoir, I’ll try to tell a little of what those first confusing and frightening years of the crisis were like.

This isn’t a story about heroics and sacrifice on my part. That wasn’t my life. I’m going to introduce you to some of the people whose paths crossed mine. Friends I lost, men and women whose lives were upended by AIDS, and quiet heroes you wouldn’t hear about otherwise. These are the experiences and the people that in the end helped make Making Gay History.

The first chapter drops July 1, 2021. Find us wherever you listen to podcasts and follow us or subscribe so you can be sure to hear this special season of Making Gay History from the start.