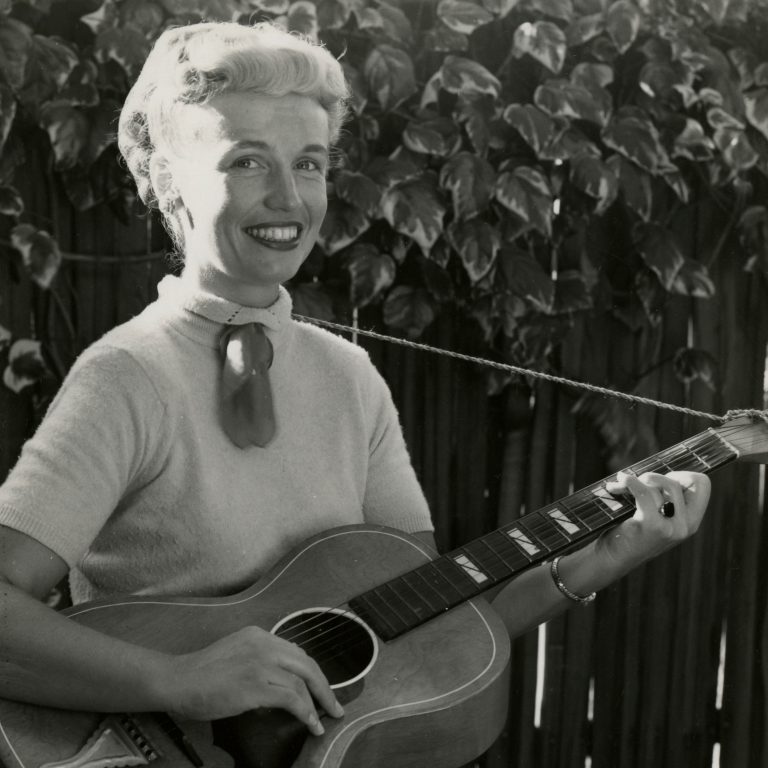 Edythe Eyde in the 1950s. Credit: Courtesy of ONE Archives at the USC Libraries.

To learn more about Edythe Eyde (aka, Lisa Ben) and Vice Versa, her 1947 pioneering ’zine for lesbians, click here to have a listen to her Making Gay History season one episode.  That’s where you’ll also find additional information about Edythe Eyde’s life, writings, and music.

Our third season is a couple of weeks away, so in the meantime, we thought we’d bring you this pre-season bonus. This is a longer version of a piece we made for Lena Dunham’s Women of the Hour podcast.

One of the most memorable experiences of my life was sitting on Edythe Eyde’s front porch in Burbank, California, as she treated me to a private concert featuring gay parodies of popular songs and heartfelt melodies she’d written herself. I’d actually gone to interview Edythe because she was the woman behind Vice Versa, a magazine for lesbians that she published on her office typewriter at RKO Radio Pictures in 1947… And you can hear more about that in Edythe’s episode from our first season.

So I wasn’t there to hear Edythe sing, but when she mentioned that she performed in gay clubs, I asked her about it and she took out her guitar.

Let’s see. Got to think what key I do… Oh yeah.

I started writing gay parodies to popular songs and, boy, they went over. You know?

I had just moved down to Los Angeles in 1945 after I spent two and a half miserable years being a secretary in Palo Alto. I moved down here. I knew no gay people in Palo Alto. As a matter of fact, I didn’t even know the word “lesbian” in Palo Alto. And the way I did find out was I was sunning myself, uh, up on the top of the garage of the place where I had a room, and some other girls that lived in the building came up, too, and spread out their towels.

I somehow noticed that although their talk was, uh, plenty of it, they never mentioned boys’ names, and I thought, well, gee, that’s refreshing, to hear some people talk that aren’t always talking about their boyfriends and breakups and this, that, and the other. One of the girls turned to me and said, uh, “Are you gay?” And I said, “Well, I try to be as happy as I can under the circumstances,” but, and they all laughed. Then they said, “Oh, no, no.” And they told me what it meant, and I said, “Well, uh, yes, I guess I am, because I don’t, uh, I don’t really, uh, actively go out and search for boyfriends. I, I don’t care for that.”

And so they said, “Well, you must come with us to a, uh, a girl’s softball game.” The game wasn’t exciting to me—it bored the tar out of me. I mean, I just don’t care for sports. I know that’s very funny for a lesbian to say, but it’s true. I never have cared for… But I went along to be with the crowd, you see, and then the next thing, the next week or so, they took me down to a gay bar.

I looked around me and tears came to my eyes, partly because of the cigarette smoke. And, uh, I thought, gee, how wonderful that all these girls can be together. So, uh, the girls could dance together there. So I started dancing with one or the other of them that would come over and ask me. I never asked them.

Uh, they asked me because I was obviously feminine. I had my hair long and I wore jewelry and, uh, I just didn’t, didn’t look like a gay gal. You know, I didn’t have the close-cropped hair and the, the tailored attire that, uh, was so prevalent in those days. And, uh, I didn’t do any of that jazz because I just didn’t feel like it, you know, and I was darned if I’m gonna, I was going to do it just because everybody else did. I mean, I am a girl and I’ve always been a girl. The only difference is I like girls.

Here’s a song I like to sing. It’s, it’s not really gay, but it is when a girl sings it.

Yellow bird, up high in banana tree,
Yellow bird, you sit all alone like me.
Did your lady friend leave your nest again?
That is very sad, make me feel so bad.
You can fly away, in the sky away,
You more lucky than me.

Well, then of course I got invitations out to here and there and I found out about a few more gay bars. There were two or three others in Los Angeles, and one of them was called The Flamingo, and they used to have Sunday afternoon dances there for just the gay kids. Uh, Beverly Shaw, the well-known gay singer, used to sing there. And, uh, she was a very good singer. We all enjoyed her. And then as evening wore on, why, the straight people would wander in just to see how the other half lives.

And the fellows would get up there on the stage and do their, uh, uh, female impersonation acts and, oh, one of them got up and made a terrible remark about, about Beverly Shaw and her being a butch or something. But, I mean, it was, uh, a very offensive joke. All the straight people ha-ha-ha at it, you know, and it burned me up. At the time I thought, what a stupid thing for them to do, to play into the hands of these outsiders by demeaning themselves in this way.

Eric Marcus: You were the only person doing this, weren’t you? As far as you knew?

EE: As far as I know, but I never, I never thought of it. I mean, it was just something that came naturally, like coughing or…

EE: Yeah, it was fun for me, and it was sort of an outlet. And, uh, so anyway, that was my philosophy on life back then, anyway: just, uh, relax, go with it, and have fun. You know?

Let’s see what else I can think of.

The girl that I marry will probably be
As butch as a hunk of machinery.
The girl I idolize will wear slacks with fly-fronts,
Tailored shirts, and bow ties.
She’ll walk with a swagger and wear short hair,
And keep me entranced with her tomboy air.
‘Stead of cruisin’
I’ll be usin’
Her shoulder to lean on
While snoozin’.
A faint-hearted fairy
The girl that I marry won’t be.

EM: What, what year would this have been when you were singing these songs?

Well, I wonder if I should bring it to a close. You said you had a…

EM: I have to go to another…

EE: When do you have to be there?

EM: Is there one more you’d like to sing?

EM Narration: I love listening to Edythe’s songs over and over again, and every time I hear something new. Edythe was so ahead of the game, coming out with a lesbian ’zine in the 1940s, and I like to think of this episode as Edythe Eyde’s Gay Gal’s Mixtape.

I’ve got a few people to thank for this bonus episode, including our executive producer, Sara Burningham, and audio engineer Anne Pope. We had production assistance from Josh Gwynn. Our theme music was composed by Fritz Meyers. Thank you also to Will Coley, our social media strategist, and our webmaster Jonathan Dozier-Ezell. Our guiding light since the very first episode is Jenna Weiss-Berman.

The Making Gay History podcast is a co-production of Pineapple Street Media and is made possible with funding from the Ford Foundation.

And one more thing. Join us for a very special live event upstairs at the Stonewall Inn in New York City’s Greenwich Village on Saturday, November 4. Tickets go on sale next week. Go to makinggayhistory.com for details. Hope to see you there!